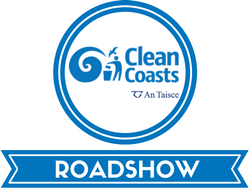 The Clean Coasts Roadshow is a series of free events for coastal communities which take place all around the coast of Ireland. It aims to bring together all those with an interest in protecting their local beaches, seas and marine life.

The Roadshow events are a mix of talks and workshops covering topics such as biodiversity, dune systems, marine litter, wildlife, sustainable developments, work by local groups and organisations, etc.

The Clean Coasts Roadshows ran from January to April in 2019. Find below a list of all the dates and locations: